It was the first time my flight was ever cancelled. Florence had been under heavy fog the day I was flying and the second stretch of my journey from Frankfurt was cancelled sometime around midnight after we’ve boarded the plane. The majority of passengers were Italians and they protested without inhibition. I was worried that I would miss the beginning of the workshops the next morning at the European University Institute. This was the first European blockchain workshop of COALA LEX , jointly organized with the Robert Schuman Centre for Advanced Studies and the Law Department, at the European University Institute in Florence. The guy next to me was sound asleep on the plane in Frankfurt. He seemed like a nice professional. So I woke him up with a gentle nudge and told him that our plane was cancelled and we needed to get back to the airport.

Florence welcomed me with its springy weather and beautiful hilly landscape. Having slept only 5 hours and excited to take part in such project, I found the energy to run to the first cab outside of the airport on my high-heeled shoes and rode straight to the University. Much to my surprise, the nice gentleman who had dozed off next to me was also in the workshop room. We greeted each other. It turns out he is from the European Commission. Our intense two day workshop thus kicked off.

There were five working groups: (1) blockchain & government, (2) blockchain & governance, (3) identity & privacy, (4) legal enforceability of smart contracts, (5) ICOs and token generation. The participants were placed in one of those five groups. I was utterly relieved to find out that I was already assigned to the identity & privacy group. I mean, how could I make such a choice? I am practically involved in all those five aspects of the blockchain. ValueCraft perfectly fits in the working group #1 and #2, and I am writing my thesis at University of Helsinki Law faculty on #3 vis-a-vis the General Data Protection Regulation. Meanwhile, I have had clients specifically consulting me on #4 and #5. So I have the experience on all five subjects. I love it when people make such decisions for me and save me from second-guessing myself forever.

Just as I was relaxing myself into becoming part of a working group and happily getting to know my interesting colleagues, she came with her Californian accent and interrupted our joyful, collegial discussion on the privacy implications of blockchain to tell us that she wants us to “look at the excel sheet created by the last term’s working group and comment”. So much for introductions and getting to know about each other’s work! Upon asking, I found out that she is our “leader” and one of the organisers of this event.

Needless to say that the flight cancellation and all the misery of spending an uncomfortable night at Frankfurt airport was not the only plight that crushed my soul. In the next a couple of hours of Day 1, my lady-boss interrupted me continuously. In retrospect, I feel that I have internalised the Finnish culture so deeply that interruptions and unstructured, off-topic conversations do really bug me on a fundamental level. They violate me! Oh boy. We were two legal brains in the team and we both wanted to cover the regulation and policy questions as applied to the technology. However, each time I tried to ask questions and implicate the E.U. laws and regulations in the context of the utility of blockchains, the lady-boss was irritated by me and forcefully dismissed the significance of the EU regulations as if the EU were a far-flung planet in the Milky Way and how could it possibly have any effect on the mighty blockchains. I also got scolded for being too academic for that purpose. Oh, the audacity. Eventually, I had to change groups and as far as I was able to see, they didn’t produce any regulation and policy-related work in the privacy group. (note to self: do not make Californian lady-bosses feel challenged or they will fire you)

My next group was perfect. We worked with legal and technical colleagues from Germany and Italy together on legal enforceability of smart contracts. Starting from a discussion on what smart contracts actually do, we delved into getting to know each other’s language and jargon. It felt great to achieve a common language as between the two camps of highly technical professionals and legal professionals who come from different jurisdictions. Richard Susskind has been talking about this over two decades now: it is inevitable that the traditional lawyers are soon going to be redundant for the most part and need to  redesign their contribution and recreate themselves as legal technologists and legal hybrids. We saw that together we could grow to fulfil this exciting and inspiring new role. First we talked about some of the concepts that are common to both disciplines such as enforceability, execution, identifiability, repudiation v non-repudiation (immutability). Then we explored what can be achieved using a smart contract and how that would fit in the legal world. Smart contracts could be used in order to transfer currency (think of Bitcoin contracts, gambling games and other financial contracts) and/or information (think of contingent payments), generate and/or transfer tokens (think of ICOs and supply chains) and organise cooperation (think of DAOs). The foremost legal challenge rests with the fact that the world is yet to find a way to link the actual resources to the tokens although there are some experiments on that. The next in the line of legal complications is to deal with different scales of fungibility of assets underlying the smart contracts. The third one is the identity problem: the more anonymous the parties are, the less enforceable those contracts will be at traditional legal systems. Where the e-signatures are employed in order to cure this problem, they must comply with the EU directive eIDAS in order to be recognised by the public bodies. In that case the catch is that the anonymity is forgone. We also discussed the possible remedies for an unintended transaction using smart contracts. Although the point of using a smart contract is to never have the option of stopping its execution, there are technical possibilities to redress this situation such as by way of blocking the faulty contract or creating new transactions in the opposite direction. Moreover, given that there is a possibility of unintended transactions, new questions related to legal risk, compensation and even insurance arise. We were all exhausted by the end of two days. But it was worth it. Indeed, we seemed to be the only group that was able to produce any written work at the end of the two-day workshop. My German colleague and I presented it together, with the great help of our Italian computer scientist team. Our works will be organised in papers and presented in the future. Stay tuned in that regard!

On the first night, the hosting University invited the participants to a lovely dinner with practically unlimited Italian wine. The dinner was delicious! On the second night, we chose a place our own. During the dinner, the nice gentleman on the plane and I got to know each other better and decided to keep in touch about the work. I am still grateful to him for not embarrassing me on my imperfect French pronunciation! Oh the wine helps. We decided to keep connected for mutual consultation on blockchain and the needs of the European businesses.

As a new Finn, I was very happy to introduce ValueCraft to others and see how our bureaucrats are interested in this project in the event. I was the only participant from northern Europe and so proud to  be part of a country that takes the lead in another progressive project.

Çagla Salmensuu holds a J.D. and is a legal advisor on privacy specialising in data protection, risks and compliance. She is also an affiliated researcher assistant at Aalto in Blockchain. 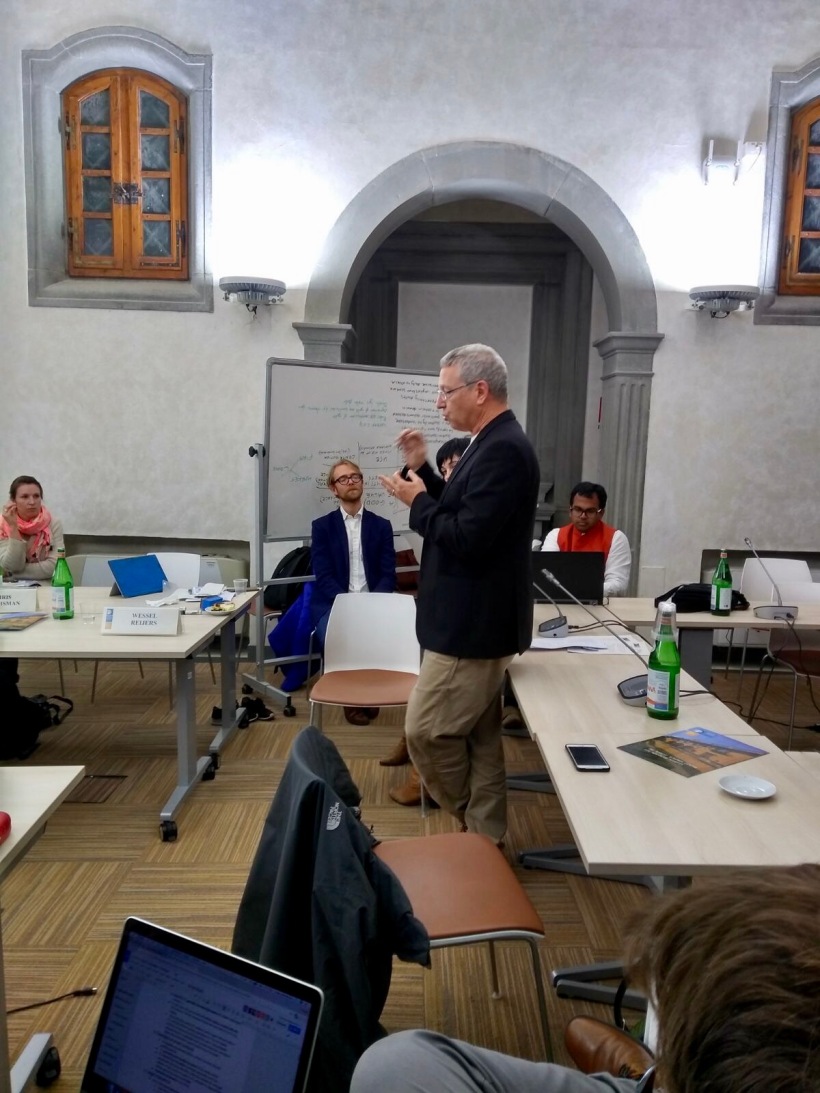